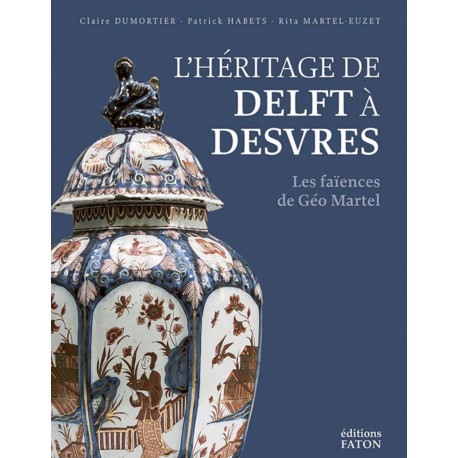 Géo Martel, a wise entrepreneur, is driven by a real passion for ceramics. He bought the factory of Desvres in 1900.
His talent as a designer and his research on enamels led him to reproduce high quality earthenware in imitation of the old Delft earthenware, prestigious or more popular, which had been put in fashion at the end of the 19th century.

Rita Martel-Euzet, granddaughter of the manufacturer, during the liquidation of the factory in 2003, has collected with perseverance a rich documentation.
Claire Dumortier and Patrick Habets were thus able to study the Delft reproductions from the Desvres factory, compare them to the originals and trace their fabulous history.

The book presents three essays on the taste of Delft, the history of the manufacture of Geo Martel and the sources of inspiration used in Desvres.
These are complemented by extensive catalogs that show the astonishing diversity of the pieces made in Desvres.
This publication, both scientific and popular, which brings together more than one thousand five hundred unpublished illustrations, will remain a reference work allowing researchers, collectors and art lovers to rehabilitate this faience production of the twentieth century, priceless heritage of Delft in Desvres.