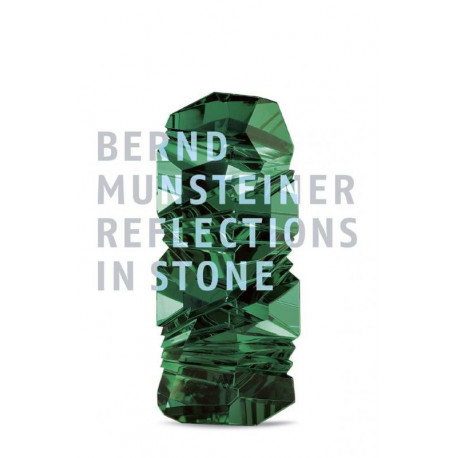 Dramatic legends often grow up around gemstones, especially diamonds. Some precious stones – as conventional wisdom has it – are cursed, such as the ‘Hope Diamond’, the world’s biggest blue diamond. Most of its unfortunate owners suf-fered dire fates – perhaps because the stone was originally stolen from a Hindu temple. Jean-Baptiste Tavernier, who presented the valuable Indian stone to King Louis XIV of France, was – as the story goes – torn by marauding dogs not long afterwards and many later owners of this ill-starred gemstone were ruined or died unnatural deaths.
Far from these popular superstitions associated with gemstones – and just as re-mote from the glitzy world of stones featuring in jewellery, facet-cutting and the conventional market valuation of stones by carat and purity – the artist Bernd Munsteiner (*1943) is on an entirely different plane with his very serious search for a new understanding of minerals. In the 1960s Munsteiner began to centre on natural mineral formations in his sculpture and was the first contemporary artist to do so. In his eyes, inclusions and ‘impurities’ in crystals are what constitute the individual qualities of gemstones (rock crystal, aquamarine, citrine, etc) so his artistic quest starts with them. At first his pictures, objects and sculptures were made from agate but he later turned to transparent crystals. Hitherto unknown visual spaces are opened up to viewers – not least through the transparency of the material. Magical ‘landscapes’ in stone are enlarged into surfaces on to which the psyche can project.
Bernd Munsteiner’s intensive preoccupation with gemstones, however, has certainly not been unlucky for him. During a career spanning more than forty years, he has brought forth a rich œuvre with which he is represented worldwide in public and private collections.
Spectacular works in sculpture such as the ‘Metamorphosis’ cycle (carved from a rock crystal originally weighing 850 kg with needle-like rutile inclusions) and the 35-cm-high sculpture ‘Dom Pedro – Ondas Maritimas’ (the largest cut aquamarine in the world) have earned him international renown as a superlatively innovative modern gem-cutter. The stuff of legend indeed – but in the most positive sense.