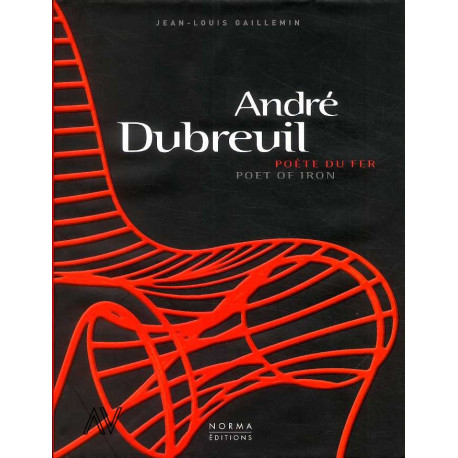 Slender, light and immediately appealing, the Spine Chair adorning the cover is one of the most well-known and widely referenced pieces of modern furniture. It features in leading museums and dictionaries of contemporary design and looks equally at home in ornate interiors and austere architectural spaces, to which it brings a touch of humour.
Following a brief career as an antique dealer and decorative winter, its creator, André Dubreuil, became a driving force le the new British furniture scene of the Eighties, alongside Mark Brazier Jones and Tom Dixon. After returning to Franceand settling in the Dordogne, Dubreuil has exhibited regularly at the Galerie Gladys Mougin in Paris. Subsequent to his first magical improvisations with steel. reinforcing bars, he began measure his talent against traditional furniture types and breathed a new Life into them. He has not hesitated to return to allusion, style, ornament and -craft.? What matters chiefly him is invention. His work has never bowed to a particular historical style and he has never known where his art would lead tomorrow. His mastery of materials enables him to create forms serendipitously, while working on a piece - this is the essence of his art.
André Dubreuil, Poet of Iron tells the story of the artist's career and introduces the reader to the totality of his work from 1985 to 2006: almost 400 pieces of furniture and objets d'art, chairs, commodes, mirrors, cabinets, docks and lanterns, whose poetry, invention and mystery always outweigh their function.