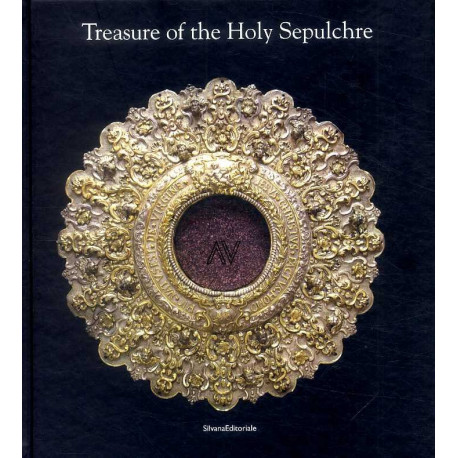 Gathered together over the centuries and spared none of their events, the works in pre¬cious metals, vestments, paraments and paintings presented here can certainly be regarded as a treasure both by virtue of their nature and especially because they were crafted for the sanctuaries in the Custody of the Holy Land and the religions services held there. The Latin o Catholic treasure of the Holy Places of Palestine, above all Jerusalem, Bethlehem and
Nazareth, are pledges of faith and piety in accordance with hallowed forms. High points of a engendered by the munificence of Catholic sovereigns, republics and donors, some of the objects displayed are the unique remnants of collections that could otherwise have disappeared entirely. Lamps, chalices, vestments and other sumptuous articles point to the promise enclosed in the emptiness of the "only tomb that will have nothing to yield up at the end of time" (Chateaubriand): objects of luxury and lavish expenditure, luxury for God. Without accruing any material benefit, the Franciscans, to whom the Catholic Church entrusted the Holy Sepulchre, in the midst of the Muslim world, back in the 14th century, could also see this as glowing recognition of the sacrifices and hardships gladly borne in carrying out their apostolate.
Finally, these gifts were involved in important questions of prestige within the context of intense rivalry between the Catholic nations of Europe, which was in turn bound up as from the 1 7th century with increasing competition for possession of the Holy Places between Catholics and other Christians, especially the Orthodox. "Driven by purely earthly interests as much as their faith" (Cesar Famin), the European powers were soon caught up in these disputes.
Some forty scholars, including many of international renown, contributed to the compilation of this work.