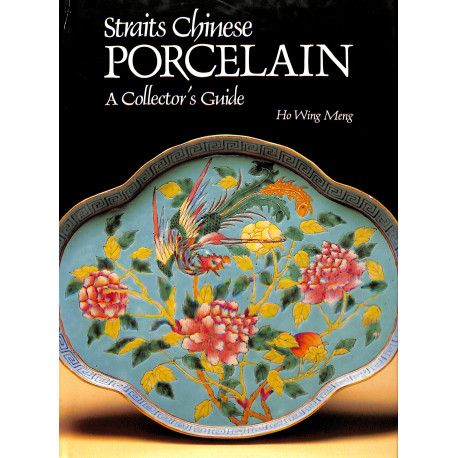 The text 'Straits Chinese porcelain' refers specifically to a little known category of nineteenth century, polychrome enamelled export porcelain, which was exclusively made for the unique community of Straits-born Chinese whose ancestors first settled down in Malacca at the beginning of the fourteenth century. Most extant pieces may, however be dated between the reign of Tao Kuan (1821-50) and the beginning of the Min Kuo era (1920), or thereabouts. 'Straits Chinese porcelain' differs from the traditional types of wares made in China, not only in the shapes of the potting but also in the style of the decorative designs. Where mandarin types of utensils tended to be sparsely ornamented and lightly painted in pale washes of enamels, nonya ware is characterised by its baroque exuberance of decorative motifs and the most vivid and colourful famille rose enamels. Despite its distinctively ornate appearance, "Straits Chinese porcelain" is decorated with but one recurrent theme, namely, the phoenix-and-tree peony design. Equally remarkable is the fact that shapes are starkly simple and functional. There are no eccentric-looking pots encumbered with superfluous ormolu works or, for that matter, ceramic curiosities simulating human and animal forms and other unusual objects. This book is notable for the new light it sheds on several other hitherto unsuspected varieties of Straits Chinese porcelain, namely, several kinds of blue and white porcelain utensils, a small group of enameled Yi-hsing wares, mainly small teapots, and some types of nineteenth century Japanese porcelain painted in crowded motifs and strong colours.